Prats de Lluçanès, capital of the natural region of Lluçanès (1), is found between the regions of Bages, Osona and el Berguedà, a privileged location which favours the cultivation of wheat and vineyards as well as fodder. With an extension of nearly 14 km2 (2) and 700 metres above sea level, its climate is continental Mediterranean, with mild temperatures in summer and cold in winter (3).

The village’s historic centre, with rich examples of cultural heritage, is well worth a visit, without forgetting the surrounding area, where it is possible to live nature on two wheels or hiking.

An immense cultural heritage allows one to get to know the region’s own personality: with the traces of highwaymen and the myths and legends they have left behind, the stories of witches, the mark of the Civil War and tens of examples of medieval, renaissance, baroque and industrial art and architecture.

Numerous routes and paths, as well as fixed orientation circuits are an open doorway to the natural wealth of Lluçanès. An area which between hills, streams and woods will uncover idyllic corners with hermitages and churches hidden amongst singular landscapes.

The transhumance route allows one to understand the importance of this activity in the area. As a result, livestock such as lambs become an essential part of the region’s cuisine. However, one cannot forget the area’s                      cheeses, cured sausages and jams. 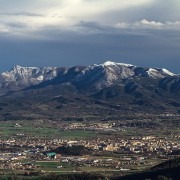