Situated in the centre of the plain of Vic (in the region of Osona), Manlleu occupies a surface of 17 km2 marked out by the river Ter (1), which has contributed to the municipality’s economic and social development (2). Historically linked to industry, which employs over half the population, it is also characterized by a landscape of forests and meadows, with a mid-mountain Mediterranean climate (3).

Discovering Manlleu’s architectural heritage, inherent to its economic development, while delving into the natural richness of the surrounding area are but two of the many proposals this active town offers.

More than two kilometres of riverbank allow one to get to know the development of this locality’s industrial evolution through its river: buildings like the Colonia Rusiñol or the Ter Industrial Museum (in the old Can Sanglas factory), make up the identity of Manlleu.

The natural surroundings marked by the Ter Park and surrounding area, allow one to follow both banks of the river on foot or cycling. It is also possible to travel by water: navigating the water in a canoe becomes a once-in-a-lifetime experience.

As with all the regions of Osona, Manlleu’s cuisine is characterised by some excellent cured sausages and cheeses. But a visit to Manlleu cannot be complete without trying the typical drink of the region: llimoneta. Each year the city organises the initiative “Idea’t”, a meeting point between culture and cuisine which delights locals and visitors alike. 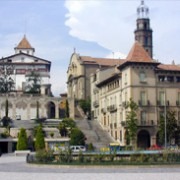