Situated in the north-west of the Baix Empordà (1), and near localities such as La Bisbal and Ullastret, Corça is divided into two areas: one occupied by small hills, and the other, a plain (2). It is an active village, thanks to notable agricultural and industrial activity as well as that of the tertiary sector (3).

The historic centre of Corça conserves its medieval structure as well as some houses on the streets carrer del Mur and carrer Major, as well as the Romanesque church of Santa Cristina (12th century), which has great architectural personality.

In Anyells, some fifteen country houses set amongst beautiful scenery make going for a stroll essential. Cassà de Pelràs, where the majority of the buildings were made with volcanic stone typical of the area is also well worth a visit.

Apart from a varied offer of bars and restaurants, it is necessary to remark that Corçà is home to a Michelin Star restaurant, the Bo·TiC, which is inspired by the traditional cuisine of the Empordà, based on creativity, and above all a careful selection of the raw materials and the wines that accompany them. 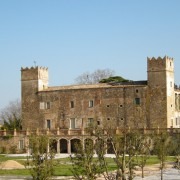