The municipality of la Pera (in the Baix Empordà) is formed by the villages of Púbol and Pedrinyà (1). Located in the lowest part and in the centre of the valley that it occupies, la Pera is raised up on a hill with a medieval urban structure formed by houses built on the hill’s slopes (2), and where the Gothic style bell tower imposes itself (3).

(3) Regional Council of the Baix Empordà

After going through the streets of la Pera it is a good moment to get to know the adjacent villages: Púbol and Pedrinyà, with surprising proposals of cultural and natural heritage.

1 km from la Pera one finds Púbol, an old fortified feudal centre, with an imposing castle (14th -16th centuries), acquired by Salvador Dalí and then converted into what is now the Gala-Dalí Castle House-Museum, the area’s principal tourist attraction.

In this village the Romanesque church of Sant Andreu (11th-12th centuries) stands out. It has been reconstructed in later years in order to maintain it and prevent it from falling into ruin.

As with the majority of the towns and villages of the interior of the Empordà, the cuisine of la Pera honours the traditions and recipes which, generation after generation have contributed to its endurance: rice, fish and shellfish, stews, salads made with products from the vegetable garden and other autochthonous products like butifarras (Catalan sausages), cheeses and legumes, which have been recovered in recent years and once again added to the dishes of the majority of the area’s restaurants. 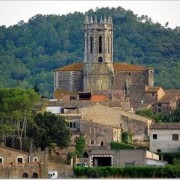