In order to visit one of the most charming villages of all Catalonia it is necessary to reach the most eastern part of the country and the Alt Empordà (1). The municipality of Cadaqués covers an area of little more than 26 km2 (2). The majority of its population uses Cadaqués as a second residence, and its principal economic motor is tourism. Characterised by its little white houses, its imposing church bang in the centre of the village and olive trees stroking the beach, the silhouette of Cadaqués is one of the most beautiful attractions of the Mediterranean coast.

To allow yourself be taken away by the magical atmosphere which surrounds Cadaqués is the principal activity this village demands.

A STROLL ROUND THE HISTORIC CENTRE

To lose oneself in the historic centre of Cadaqués –of medieval origin- walking along its rambling, cobbled streets, going up to its highest point and entering the celebrated church of Santa Maria, or wondering up to the lighthouse at Cala Nans, all stand amongst the most beautiful experiences an exceptional village can offer.

If we walk fifteen minutes from Cadaqués, and reach the cove of Portlligat, we will not only have enjoyed one of the most spectacular maritime views of the Empordà, but we will have reached Salvador Dalí’s house, which has been converted into a museum, explaining the artist’s fascination with this singular landscape.

Influenced by the cuisine of other areas of the Mediterranean (Sardinia, Corsica, Sicily, France…), the gastronomy of Cadaqués is characterised by its simplicity and for some intense flavours harking back to the origins of traditional cuisine: sea urchins, rock mussels, lobster, rice dishes, suquets… without forgetting the wines, indispensible guests at any table. 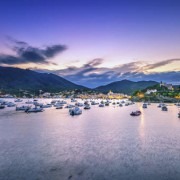