Situated 17 km from Girona and 100 from Barcelona, Anglès occupies an area of nearly 17 km2 in the region of la Selva (1). Surrounded by rivers and the Guilleries massif, it is often said that Anglès has a microclimate, though it is essentially Mediterranean, with average temperatures (2). Industry is present in the area with two textile factories and numerous workshops which give work to the population of the area (3).

The area surrounding Anglès, situated on the centre of a small hill in the middle of a plain through which the rivers Ter and Osor pass, includes various urban nuclei and neighbourhoods, allowing one to enjoy a historic centre unique to the region.

The Gothic Quarter, with large gates, windows and buildings of the former nobility, adjacent to the main square (the old main square of a castle that no longer exists), still conserves a part of the old medieval walls. The town’s notable architectural and industrial heritage reminds one of a past time of great economic activity.

The Vía Verde del Carrilet (an old and now unused trainline) with a cycle path that communicates Olot with Girona and the Costa Brava allows one to take great pleasure in the landscapes and nature of Anglès and the surrounding area; the forests and vegetation covering the mountains, the woods, riverbanks, and vegetation on the plain. Without forgetting the area’s autochthonous fauna: boars, foxes, rabbits, badgers, birds of prey…

Cheeses, meats, products growing in the wild, fish, shellfish… and a wide range of products characteristic to the region such as the modernistes, a type of sponge cake typical in Anglès, which has been prepared for over a century following the traditional method. In addition the annual Ruta de la Botifarra (Route of the Botifarra Sausage) or Ruta més dolça (The Sweet Route) allow one to delve into the local cuisine. 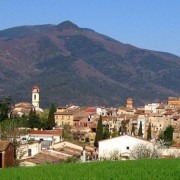