What is a Masía 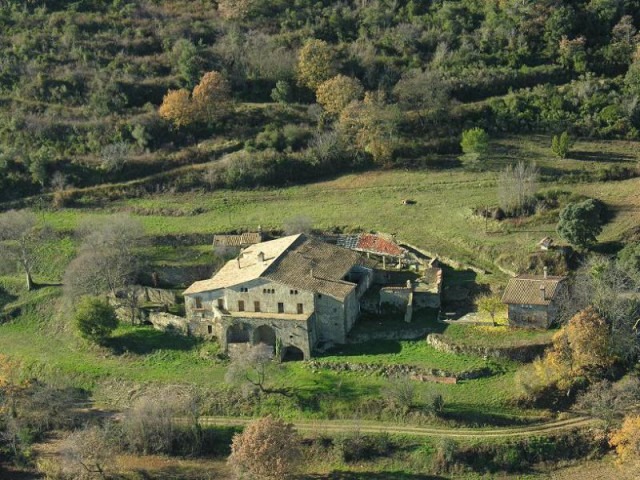 Masía is the name designating the secluded cottage, assigned to a country estate from a holding livestock agricultural character or familial. Mas word is derived from the Catalan word "More", and this, in turn from the Latin word Mansum. Encompasses all traditional farm self-sufficient type and character, it is originally from some areas of eastern Catalonia. As a rule, the peasant family that owns a farmhouse dwells permanently in the house, living solely on what they produce. The right of exploitation is transmitted from parents to children, according to custom inherited from the Middle Ages.

It is a type of rural construction, very common throughout the east of the Iberian Peninsula, particularly in the former Kingdom of Aragon that has its origins in ancient Roman villas.

The type and structure of the house is variable. always Depending on the area of ​​geographic location where you are and the type of farming operation to which it is dedicated, whether livestock, agricultural grasses or wine, it has further developed the stables, the barn and the cellar, respectively as logical.

Regarding the type of key to the farmhouse is dedicated operation, they seem to be distributed, with few exceptions, in certain specific regions of Catalonia. The houses of agricultural grain type are located in the region of the Ampurdán; livestock, in the upper reaches of the High Montseny and Llusanés; wine-growing in the area and the Penedes Priory; and lastly, horticultural, in the region of Maresme, in the delta of the Llobregat and Ebro rivers in the region of Segriá.

Distrubution of the farmhouses. The Masías usually distributed between two or three plant and usually cover a gabled roof, but there are farmhouses with roof of one side, or more complex, church type, with an outstanding body of the rest of the roof, these the stand of the building, protected the walls of the farmhouse, whatever the material used in construction were stone to a height of one meter and a half. The wall thickness was between forty to ninety centimeters. In some important farmhouses built in the sixteenth and seventeenth centuries, the ceilings had a vault, but in most the ceilings are smooth.

The geographical orientation of the house is a very important and very cared for by their builders, presenting the main openings at noon ie south. To protect the North and get maximum sunshine. On the ground floor of the farmhouses usually find large kitchen, surrounded by several outbuildings, such as sheds and barns. On the main floor, the second as a rule, are the rooms and halls. The upper floor can be used as storage, drying of grain and fodder.

Often there is also outbuildings housing as stables, warehouses grain and fodder forming as a courtyard, in some cases are linked by perimeter walls that connect them walling the farmhouse, which look like a small castles or fortresses.

The elements used in its construction have changed over time; Also, the location of farms has also conditioned the type of construction material chosen. Thus, in mountain areas, the material has been used unpolished stone. In the arches or lintels of doors and windows in the crushed stone it was used. In places where the stone is scarce he resorted to adobe construction.

During the Middle Ages, stones joined with mud mortar material was replaced later by lime mixed with sand, mortar or cement.

In the Old Kingdom of Aragon, the first farmhouses came to replace or supplement to the farms. A farmstead was a small rural community of a few houses, consisting of one or more families, who dedicated themselves to exploit the surrounding lands as well as livestock activities.

Differentiation between farmhouses. The stone farmhouses built before the sixteenth century have a gateway arch while those built until the eighteenth century are lintel. The plant used no more than five meters and the coverage was done through a network of wooden beams placed perpendicular to the facade. It was covered with shingles or tiles. In the area of ​​the Pyrenees and other mountainous areas, coverage used to be slate. Many farms possessed towers, or exterior walls to defend the inhabitants of border and coastal areas.