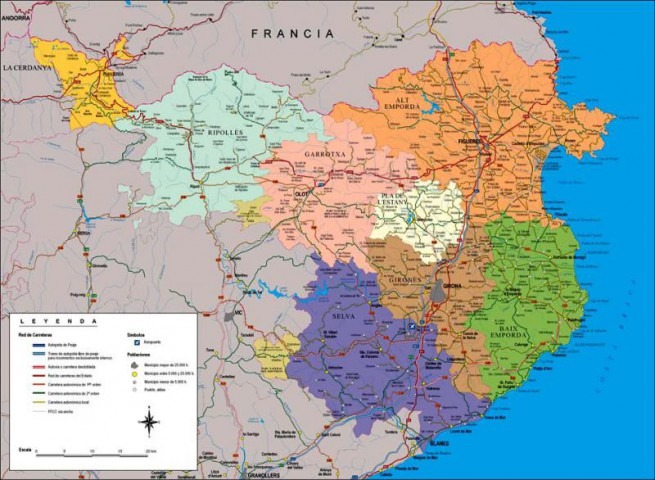 More than 12,000 kilometers of roads, 5,600 correspond to roads whose ownership holds the Generalitat of Catalonia with 4,400 to county councils, and 1,988 to the Ministry of Development of the Central Administration. The structure is centralized motorway towards Barcelona.

A-2, which connects Barcelona with Lleida to Igualada and Cervera.

AP-2 (surcharge) linking Barcelona with Lleida. Then, proceed to Zaragoza and Madrid.

AP-7, known as the Highway of the Mediterranean, through Catalonia uniting, on one hand, Barcelona with La Junquera via Gerona and Barcelona with Valencia through Tarragona. The AP-7 has a bypass linking Molins de Rey Montmeló, bypassing Barcelona. This road, the B-30, is the third belt of Barcelona and north-south vertebra populous and industrious region of valleys.

C-25, joins Riudellots de la Selva (Girona) with Cervera (Lleida) away from Barcelona. It has 153 kilometers and is known as transverse axis.

C31 / C32, also given the name of "Highway Pau Casals," Vendrell Barcelona joins with tunnels that prevent the Garraf Natural Park. With a total length of 56.3 kilometers, the C-32 is the most expensive city in Europe to have two motorway tolls. C-32 is also the name given to the toll motorway linking Barcelona and Palafolls (gateway to the Costa Brava), although this stretch of 49 kilometers is known as "Autopista del Maresme".

C-33, is access to Barcelona in the north of the city, which connects to the AP-7.

C-58, is the most densely highway vehicles and the first in Catalonia to have an Bus-HOV lane. This highway is access to Barcelona in the north and connects with the C-16 at the height of Tarrasa.

Catalonia was the first Spanish mainland to have rail. It was the October 28, 1848 when the line between Barcelona and Mataro, covering a distance of 28.4 km was inaugurated. In the following years, before the entry of the twentieth century, more than 1,000 kilometers of track (almost 80 percent of existing roads) were constructed, with several routes between Barcelona and the main Catalan cities. Most roads were financed by the private equity industry who wanted to speed up the transportation of their goods to the big city.

Currently, although trains have been modernized, the road network is still virtually the same as 100 years ago, with a highly centralized structure towards Barcelona.

The two main routes are the coast between France and Valencia by the Catalan coast, and the route to Zaragoza, which connects Barcelona with Lleida through Manresa.

The owners of the railways in Catalonia are ADIF and the Railroads of the Generalitat of Catalonia. Operating in Catalonia operators RENFE Operadora and the same FGC.

Barcelona-Madrid, Barcelona-Sevilla and Barcelona-Malaga in the early months of 2008, the AVE high speed line, with 3 lines in service went into service.

The high speed line will be extended to the French border, where he will continue to connect with the current French high-speed network, making rapid rail link between Barcelona and Paris will also be established.

Moreover, the government of the Generalitat of Catalonia in December 2005 announced a plan to build 1,100 km of new lines, 300 in conventional routes and 800 high-speed tracks, which join the main Catalan cities crosswise. The plan will involve the investment of 25,000 million euros between 2006 and 2026.

Three between the towns of El Prat de Lobregat, Viladecans and Sant Boi de Llobregat to a height of four meters above the average sea level.

It has two passenger terminals, a corporate terminal and air cargo center.

It is the largest airport in size and traffic of Catalonia and the second busiest in Spain after the Madrid - Barajas. Now he renamed with the name of Adolfo Suarez.

In 2012 he managed to move to the third place in the European ranking and the first in Spain in terms of passengers on direct flights.

Total traffic in 2014 amounted to 37 559 044 passengers, which represents an increase of 6.7% over the previous year and record high passenger.

Today it is one of the airports that more growth has experienced in recent years, mainly due to the fact that one of the main bases of Ryanair in Europe.